What a Scavenger Hunt! 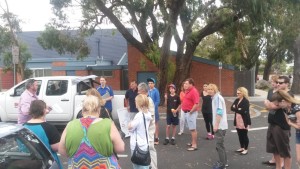 Wow – what a Scavenger Hunt it was.  A cool breeze greeted us early on Sunday morning as the teams arrived for check in.  After a bit of early morning competitive banter, teams were given their lists (items to collect; things to do), and the location of the half way point.

Teams went off in all directions and the funny photos started to emerge on Facebook…grandparents going down slides at a playground, human pyramids on the beach, three grown men in a shower (fully clothed of course)…we knew this was going to be a fun day! 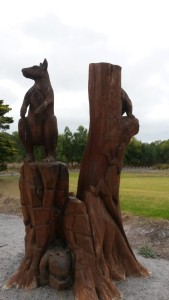 Teams soon caught up to each other at the half way point at Braeside Park and some more tasks were given.  Our counting skills were tested as we admired the phenomenal tree carvings and determined how many animals there were.  Where we were to go next was all a mystery until team members found our trusty President hiding in the park to handover the envelope with our final destination.

Teams were quickly off again as they scrambled to find all of their scavenger items before making their way to the finish line at Cardinia Reservoir Park. After a well earned drink and picnic lunch, it came down to the crunch – judging time.  As the ‘official’ judges Linda & John laughed at all the photos taken along the way, they were also faced with some inventive solutions to the items required to collect (item to collect = one Rotary sticker; a teams solution to this instead of providing an actual sticker = team members reciting “We don’t have a sticker, but we are sticking to Rotary because Rotary is sticking with us”.  Points awarded!

The top three teams were awarded prizes, thanks to Brakes Plus Frankston and Ultratune Frankston.  We hope everyone had a great time and look forward to next year!

For action photos / to have a laugh, click HERE!